In case of Allottee

In case of GPA Holder/Agreement to Sell

In case of Allottee

In case of GPA Holder/Agreement to Sell

Have any Doubt related to our DDA Freehold Services?

Request For Call Back

BENEFITS OF FREEHOLD OVER LEASEHOLD

Owner of the Property is no longer confined. He can enjoy free ownership.

Owner of the Freehold Property can transfer the property without any restrictions. You are free from the state of restricted.

After getting converted the Property into Freehold, the Property will posses an higher value of about 15-20% as compare to the Leasehold Property.

Freehold Property Owner is free from loosing his pocket in order to pay for Ground Rent.

Any person who is the Original Allottee of DDA Property or the person who purchased the Property from Allottee as the GPA Holder/Agreement to sell can apply for Freehold Conversion.

WE PROVIDE SERVICES FOR LEASEHOLD TO FREEHOLD CONVERSION, OUR SERVICE INCLUDE:

“We will work for your entire conversion case; there is no need for you to visit DDA Office again and again. You have to come only at the time of Execution and Registration of Conveyance Deed”

We provide services in Residential Plot also. To know more, Please Contact Us.

What is meant by Leasehold and Freehold? How both the terms differentiate?

As the term says Leasehold property means buyer has purchased a property on a lease from Delhi Development authority and paying Ground Rent yearly for the same, whereas Freehold property means that the buyer is a sole owner of property and conquer full rights to sale/rent out the property.

Difference between Leasehold and Freehold –

What is the DDA Freehold scheme of Conversion from Leasehold to FreeHold?

As per DDA Freehold Scheme and Sources –

As per the order issued by the Govt. of India, Delhi Development Authority (DDA) has decided to convert the residential flats by executing the Conveyance Deed in the name of Allottee/Purchaser/GPA holder in respect of flats allotted by DDA on freehold basis constructed prior to the year 1992.

What is Conveyance Deed?

Conveyance Deed is a Legal Document which serves a proof of transference of Ownership from one owner (DDA) to another OR we can say it act as a Evidence that one party has legally signed and has transferred the ownership to other party. Conveyance Deed plays a vital role in respect of sale/purchase of property and to claim the Ownership.

After completing the process of Leasehold to Freehold conversion, DDA issue Conveyance Deed to the buyer/owner of property. 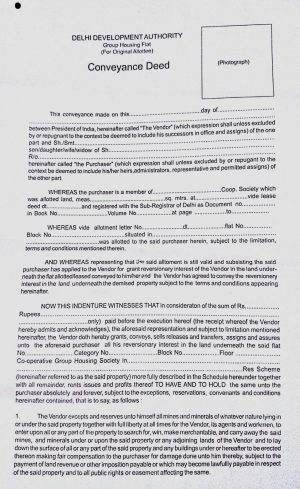 SALIENT FEAUTERS OF THE SCHEME

Who can apply for Leasehold to Freehold Conversion?

What are the Documents required for conversion from Leasehold to Freehold?

DOCUMENTS REQUIRED FOR GPA HOLDER/AGREEMENT TO SELL OF CGHS FLAT –

(Copies of Complete chain of Power of Attorneys along with Agreement to Sell and Payment Receipt).

(NOC is required from the mortgagee in case the flat is mortgaged).

DOCUMENTS REQUIRED FOR GPA HOLDER/AGREEMENT TO SELL OF DDA FLAT –

What are the DDA Conversion Charges from Leasehold to Freehold?